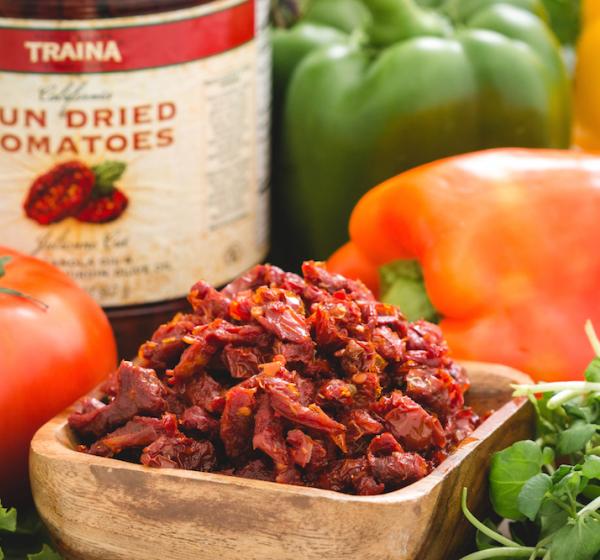 When it comes to differentiating one menu from the rest, chefs can utilize a number of ingredients to help their dishes truly stand out from the pack and make diners want to come back again and again. One of those secret ingredients is Traina Foods Sun Dried Tomatoes. With such powerful flavor, the addition of sun dried tomatoes can take any dish from blah to wow!

Use Them in Dressings

Traina Foods Sun Dried Tomatoes have intense flavor, so when added to salad dressings, marinades and vinaigrettes, a little goes a long way! With a general guideline of “fat to acid” ratio being three parts fat and one part acid, these dressing ideas will splash up any green or pasta salad. The trick to fully emulsifying the dressing is to shake all ingredients in a tightly sealed jar or quickly whisk.

Pair Them with Pasta

Sun Dried Tomatoes and pasta go together like peanut butter and jelly. With the addition of a few other bold ingredients, such as anchovies and capers, this Sun Dried Tomato Pasta dish will have diners ordering a second bowl! Another clever combination features Sun Dried Tomatoes, Asiago cheese and spinach over pasta.

Traina Foods Sun Dried Tomatoes also complement the flavors in Asian dishes, and can bring a traditional dish, such as shrimp lettuce wraps to the next level. Check out this video for Traina Foods’ Shrimp Lettuce Wraps with Sweet Chili Sauce and Sun Dried Tomatoes for a quick upgrade on ordinary lettuce cups.